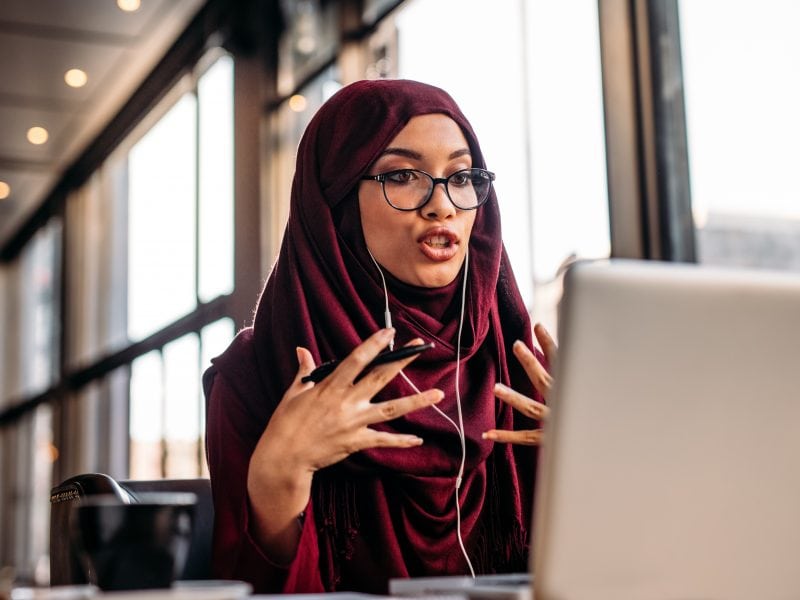 Performance reviews are an essential part of managing a workplace effectively. That said, as vital as they are, the annual performance review carries with it a weight of notoriety and dread. Employees fear comments of undeserved reproach, and managers fear the discomfort of criticizing the team that they work to build a good relationship with.

As some of us have experienced, there are certainly less optimal strategies to employ during a performance review. You don’t want to be soft on an underachieving employee, but you can’t run them out of the room either.

Your mission isn’t as much performance “management” as it is performance “enablement”. Focusing on chastising underachievement instead of encouraging overachievement is a recipe for stagnation among your team – this is the time to enable them to succeed going forward.

There are countless ways to keep your performance review constructive while maintaining a friendly countenance, no matter who you’re talking with. An effective round of reviews can be the difference between a disgruntled team and a satisfied one.

The optimal method of reviewing, especially for a hybrid workforce, is submitting the written review to the worker and following up with a one-on-one discussion. Laying out all your judgments for the first time in person is archaic and can leave employees emotional and unprepared to respond appropriately if they’re unhappy with the criticism you’re giving.

Some managers remedy this by separating the two – a little. They may email the review to the team member (or even physically hand it to them) and let them know the one-on-one will be later in the afternoon. This doesn’t necessarily erase their emotional reaction later on, and will probably distract them for the time in between. If you’re upset about something, and you have to deal with it in an hour, that’s all you’ll be thinking about for that hour.

The best way to separate the two performance reviews is by splitting them a day apart: the written version the day before the meeting. They may be displeased with it, but they won’t be caught off guard or stuck feeling emotional come the next day’s meeting, and they may even think it over and realize it’s a more accurate assessment than they initially believed.

Now, if you’re filling the review with high praise, the overnight buffer isn’t as essential. If you’re worried about how the person will respond to criticism, though, it’s smart to give them some time to process it.

Some leaders will actually have their employees do a self-evaluation the day before in order to get an idea of where they believe they are from a productivity standpoint. Whether the precursor to the meeting is an evaluation from you or themselves, leave space in between for everyone to think it over.

Naturally, when giving performance reviews to a team that works together and talks about their experiences, you would want to remain consistent from person to person. However, that can lead to an all-too-common trap –the “compliment sandwich”.

This is a method of feedback where you begin the discussion with some praise, include constructive criticism in the middle, and end it on a high note with more compliments. In practice, this works for some employees very well; many people are reliable workers with few areas to improve in.

The mistake is made when you get used to handing out compliment sandwiches and then apply the formula to everyone on your team.

If you have a couple of underperforming employees on your staff, you’ll end up reaching harder to find compliments and condensing your criticisms to the middle. Even if your criticisms were valid, they’ll likely leave under the impression that you see them as an average worker, and won’t make an effort to improve because they got a solid amount of praise.

At the same time, don’t be afraid to give your best performers a more glowing report. If you dig to find criticisms to complete the template, he or she could leave discouraged because their extra effort didn’t earn them a great review. You can, however, suggest ways to improve and take their success another level higher.

Dick Grote, author of How to Be Good at Performance Appraisals, notes, “Most people are good solid workers, so for the vast majority, you should concentrate exclusively on things the person has done well.”

A way to evaluate your staff consistently without falling into a template is by using Pixar’s “Yes, and” approach. With this strategy, criticism is “plussed” in order to be more constructive. Acknowledge what they’ve been doing poorly with a “Yes,” and offer a solution with an “and…”.

For instance, “Yes, you’ve lost a few clients in the past month, and this can be remedied by,” X, Y, and Z. It’s a reliable method of feedback that can even apply to your most productive employees, if you wanted to suggest something to take their efforts even further.

Don’t skew your reviews to fit a pattern, but tailor them to reflect on exactly how well the person is doing. They’ll leave with a better picture of their aptitude as a worker and will be enabled to either fix it or keep it up.

A 2019 study by Princeton University found that the average person will assume someone is a more effective worker if they’re wearing nice clothes and have attended a prestigious university. Without knowing anything about their aptitude at their job, the first impression was convincing enough.

Sometimes as a manager, you can find yourself assessing your team on the surface without getting deeper into their actual performance. You may have some members of your team whose qualifications and overall persona have pigeonholed them in your head, whether for better or for worse.

Always go deeper. Perhaps their sales have been among the top of the branch, or they’ve been tapering off lately. If your business is less numbers-oriented, you can also reflect on their participation; have they been checked out or dialed in? Have they been knocking their goals out of the park or barely meeting expectations?

This not only gives you an accurate impression of how valuable they are as a team member, but it’s also evidence that’s much easier for them to accept during the one-on-one conversation, as they know you’ve made an effort to be free of bias. If you claim that they’ve been falling behind and you show them the evidence in the data, they’re likely to understand.

Sometimes you know exactly what constructive criticism you’re going to pass along to someone, but then you get stuck on the phrasing. How do I say this without coming across as blunt, or mean?

It’s important to never sacrifice the truth in favor of being more polite; if a team member isn’t meeting goals, you need to tell them how. If you’re seeking a productive way to deliver the information, look towards Yale professor of management James Baron’s “Stop, start, continue” approach.

After introductions, tell them the most pressing issue that they need to change. Let them know of a better alternative they can do to fix it, whether it’s beginning a habit or cutting one out. This is most effective when paired with data; if you can point to something like struggling sales that result from a certain error, they’ll more easily understand.

Lastly, on that momentum, let them know what aspects of their work are impressing you, and that they should continue doing. You can incorporate Pixar’s “Yes, and” approach here too, if you find that it applies to their setting.

This method gives them your important concerns right out of the gate, but proceeds to get more positive and encouraging as the meeting ends. The employee knows what they need to fix without leaving with a sour taste in their mouths.

5.      Get feedback from others around the person

You may find yourself giving a performance review to an employee who reports to multiple different supervisors, whether indirect managers, team leaders, or HR advisors. If you feel like you need a more holistic idea of this person’s productivity, it’s always a good idea to ask around and crowdsource feedback.

There’s a strategy for a good 360° feedback. A team leader might tell you that this person missed a couple deadlines on a particular group assignment, and you might remember they also recently missed an important one for you. Now, you shouldn’t tell that employee, “So-and-so told me you were missing deadlines on that project.” This creates an air of mistrust, as the person now feels that their teammates are talking behind their back.

Instead, frame bad feedback you hear in a more general sense. They’re aware the criticism is true, but since it’s non-specific, they won’t get the impression that comments about them are circulating the office. Simply say something like, “You’ve been having trouble getting things in on time, and it shouldn’t continue. How can I help?”

If you ask around and their other teammates have good things to say about them, e.g., “I watched them put in a lot of extra effort to land three big clients in a week,” you can absolutely feel free to let them know you heard about it and commend them for it. They’ll leave feeling recognized and motivated to continue the extra effort, knowing you’ll probably hear about it.

Getting feedback from their peers is always a good idea, as long you know how to pass along the information.

Proceed with caution! This strategy isn’t necessarily for everyone. If you have a good deal of self-awareness regarding your reputation among your staff, you’ll be able to decide whether it’s a fit for you.

When an employee’s receiving a face-to-face performance review, they feel like they’re on the spot and that the power dynamic is more skewed than usual. As a manager, you don’t want that to be the case, but it seems unavoidable.

However, if you let them know that they’ll have an opportunity to give you feedback yourself, they’ll feel more comfortable and receptive to what you have to say. Sarah Franklin, co-founder of Blue Tree AI, advises, “An effective performance evaluation includes the employee evaluating me as well. I want to hear from my team what strengths they feel I have and in what areas they need more attention from me.

In fact, returns from such feedback are quantifiable; a Gallup study found that managers who received feedback on their strengths showed 8.9% greater profitability after the review.

Now, you may have made some mistakes recently, or disgruntled a few employees, or simply felt that you didn’t complete many goals over the last year. This is okay – as long as you don’t believe their feedback will be overwhelmingly negative, it’s healthy to hear some mixed opinions. An important step to this is to make sure they don’t take the performance review as an opportunity to complain about you; instead, you could suggest the use of something like the “stop, start, continue” technique.

You may be wondering to yourself what your team’s opinion of you is in the first place. If you’re not sure, it might be a sign of a different issue – you’re not keyed into your staff’s circle. When a workforce finds that their manager is unapproachable or distant, it creates a host of problems that belong in a different discussion.

If you’re a great manager and you know it, this is the perfect method to make your performance reviews a less intimidating experience. If you’re worried your team might mutiny any day now, though, you may want to skip it.

With all the different elements to perfecting...
SEARCH RELATED CONTENT
engagement helloteam manager meeting one on one performance review team