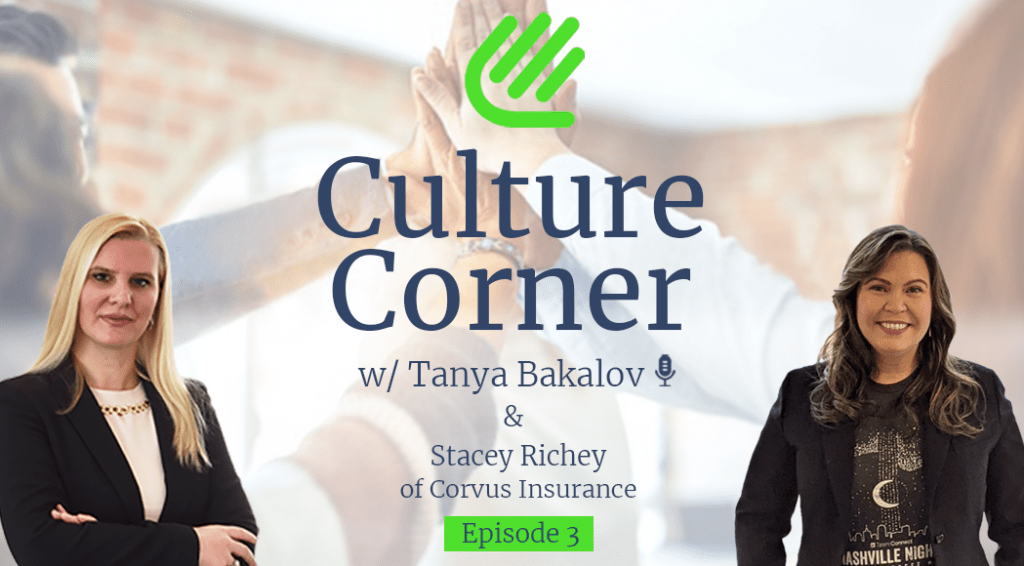 HelloTeam is proud to welcome Stacey Richey, VP of People at Corvus Insurance, onto the third episode of the Culture Corner Podcast. Listen as Stacey speaks with Tanya Bakalov about her journey through her career, beginning as a recruiter with a bachelor’s in management. She also discusses the ways the COVID-19 pandemic affected her company, and the characteristics up-and-coming professionals should spot when seeking organizations with strong cultures. Listen on Spotify, Amazon Music and more!

5:27 – On Stacey’s company, Corvus Insurance, “We are bursting, and our business is booming. And, you know, what we do is we offer cyber insurance… So you can imagine with this pandemic, so many companies are moving to the cloud, and there’s such a high need for these companies to be insured, and to have proper insurance; you hear about ransomware attacks and security breaches all the time.”

10:06 – “And so what we do and what the philosophy has always been is, let’s hire where the talent is. And let’s make sure our employees feel comfortable being their most productive selves.”

10:38 – In response to a question from Tanya on getting feedback from employees, “We do pulsing, so we do our employee engagement surveys… What is your preference? Do you want to work from an office? Do you not want to? And we’re asking that question, in a way that we’re not asking it to deliver an answer. We’re asking it to really support our employees with what they want. And recognizing that, yeah, right now, they might feel a certain way, but six months from now, nobody can really predict how they’re going to feel.”

11:54 – “We’re not one of those companies that’s going to say, yes, every single person has to be in the office, we’re not going to tell our employees that we’re also not going to tell them where and how to work, we expect them to tell us that and let’s make sure that we’re supporting them that way.”

12:37 – Following a question from Tanya on productivity in a hybrid setting, “Yeah, I wouldn’t say that there’s been a productivity dip. What I will say is that it’s just different to build culture when your team is more geographically dispersed. And think about, like,  most of the company has been hired within the last year. So most of the people have been just like myself at Corvus, less than a year. And so how do you build those connections?… We’re all here to get a job done. And we are all going to have fun doing it.”

17:40 – Tanya – “I’ve worked with a lot of private equity companies myself. At some point of time, it becomes about the numbers and it becomes about the product, and “what are you doing for me today”, and we forget about that. It’s the people that make us successful, and you cannot replicate culture. And once you have that, and people willing to do a lot for you, the company becomes extremely successful.”

20:58 – Stacey, on moving from California to Boston, “I get made fun of a lot here when I moved to Boston for a few different reasons. California, it’s interesting, because you’ll walk up to somebody and you’ll meet them. And it’ll be like, you know, “Are you feeling really centered today? Like, what’s your vibe” like this and that. And ever since I’ve been in Boston, nobody’s asking me if I’ve ever felt centered. I’m still waiting for that question.”

23:43 – Stacey’s book recommendation, “So there’s a book that I love, and I’m halfway through it. But it is Culture Renovation. And it’s by Kevin Oakes… It’s been awesome in terms of providing a blueprint and fresh ideas on how to actually build a culture in both like a very systemic and process driven way and very intentionally, but also making sure that what you’re doing in your culture initiatives are resonating and landing well with the employees.”