Episode 1: Veronica Curran chats about her personal and professional journey 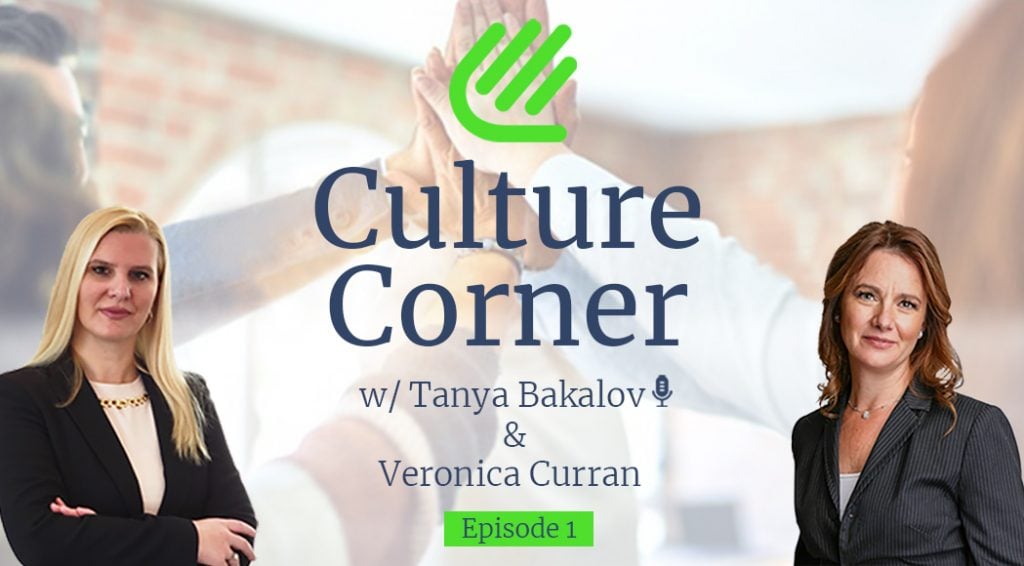 We’re very excited to debut our inaugural episode of HelloTeam’s new podcast, “The Culture Corner”, hosted by our CEO Tanya Bakalov. Our very first guest is Veronica Curran, CPO of Alumni Ventures Group. In this episode, Veronica discusses the ways her personal journey has affected her professional journey leading and hiring for different companies. As a working mom, Veronica’s story resonates with so many women that feel they are attempting a balancing act between having a career and a family. Listen on Spotify, Amazon Music and more! 2:33 – Veronica combined her social aptitude and her interest in interviewing/research to find a place for herself in executive search, allowing her to talk to others and find roles that suit them.

3:02 – “In so many different ways I saw the goodness of doing something for others.”

4:03 – Veronica was pregnant with her first child when she was laid off in 2008, alongside 60% of her company. She knew pivoting from her past position was the right choice, and was able to secure a position at Bain Capital after being recommended by a friend.

7:28 – Tanya discusses how prospective candidates at HelloTeam should take initiative, “You can’t be narrow-focused, you know, because if you have the passion for something, and if you have the aptitude, you should explore a couple other things and you should bring up the things you’re really good at with the employer and they will recognize you for that. So speak up, and tell them what you want to do…”

11:18 – Veronica discusses the pain points of working as a people leader with a fintech company made up of remote employees, “There were 12 offices around the world, and we had employees in 18 different locations around the world, so, it was pretty intense and pretty complex as a company, especially from the people operations side, you know, how to sort of bring all these people together and still feel like you’re one company… and all of them are still my friends today.”

14:02  – In response to a question from Tanya on the trait she found most helpful when it came to moving through her career, Veronica replied, “You have to take some and really understand what are the pieces along the way that make you happy and satisfied, and that you’re passionate about, so I would say to people, ‘Try a couple of things out early on, but start to hone in on the things that you really love’”.

17:43 – On advice to give to people who are job searching after recently losing their jobs, Veronica says, “My best advice is, first and foremost, to do a lot of research. So, if somebody’s interviewing for the first time on a Zoom call, understand what you’re interviewing for and have created sort of a list of questions that you might expect to be asked, but be prepared for types of questions that you don’t expect. The research piece is so important, because at least if you’re prepared, that’s a huge plus, the company looks at that as, they’ve done a lot of work, they’ve been well-prepared, and they give a two-thumbs up.”

19:19 – “It’s not just what you love as a person, but sometimes, especially as young people who are just starting out in their career, take some chances on at least the company that you feel good about. Get your foot in the door, do whatever it takes, work hard, and then eventually that hard work pays off and you get to choose something that you really love.”

22:55 – “One of the things I’ve learned along the way is to put some balance in place, so any role that I take I always think about, well, first and foremost I need to understand my goals and priorities so that’s where I’m focused, so that it doesn’t imbalance me, otherwise you have too much on your plate and you’re doing too much, and you’re taking that time away from those precious little people that you’re taking care of.”

24:05 – Tanya and Veronica close out the conversation by talking about the hobbies they have and the ways they decompress after work.